NB: This conference is not run by the WSG. Please get in touch with the organisers directly for more information. 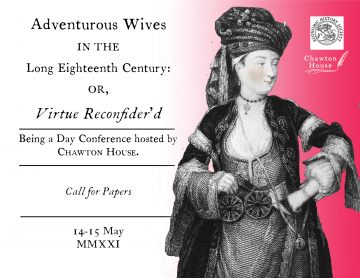 After postponement last year due to the Coronavirus, Chawton House will now be host to an online conference in May 2021, and the conference organisers, Dr Alison Daniell and Dr Kim Simpson have reopened the CfP:

In Charlotte Lennox’s 1752 novel, The Female Quixote, an eighteenth-century Countess is horrified when she is asked by the romance-obsessed heroine to relate her ‘adventures’, professing:

‘The word adventures carries in it so free and licentious a sound in the apprehensions of people at this period of time, that it can hardly with propriety be applied to those few and natural incidents which compose the history of a woman of honour.’

The idea that during the long eighteenth century virtuous wives were increasingly relegated to the domestic/private sphere, their legal and economic identities subsumed into that of their husbands, is a long-standing one. However, recent and ongoing research is challenging the orthodoxy of this narrative and demonstrating that the roles available to married women were more complex, nuanced and dynamic than mainstream assumptions have generally allowed. For example, Elaine Chalus has explored women’s engagement with politics and the electoral process; Joanne Begiato’s examination of the divorce process has shed light on the lived experience of married women; Amy Louise Erikson has interrogated the laws relating to women’s property ownership; and Briony McDonagh has examined inter alia how landowning wives managed the combined duties of married life and estate management.

However, research specifically relating to ‘wives’ is often buried amongst the wider topic of ‘women’, and cross-disciplinary patterns and conclusions relating purely to married women may be lost or go unrecognised.
On Friday 14th and Saturday 15th May, Chawton House will host a two-day digital conference to bring these revisionist narratives together and examine the role(s) of the wife as seen through the fields of literature, social and economic history, law, art history and material culture.

Papers are invited on the following topics:

• The economic and financial autonomy of women following marriage
• Feme sole traders
• The visibility of single versus married women in the literature of the period
• Wives’ involvement in politics and public life
• Working wives
• Women and the divorce process
• Inheritance and the transmission of property through the female line
• Trusts, property ownership and separate estate
• Wives as educators
• Conduct literature and wives
• The married woman as literary heroine
• Quasi-marriages and kept Mistresses
• The married female body
• Material culture, fashion and taste
• Housewifery
• Wives as guardians of morality and social order
• The historiography of the wife: change or continuity?

We would prefer delegates to pre-record their talks, submitting them by 15 April, but if this would be an issue for you then please get in touch. There will be synchronous Q&A sessions following panels. Please submit abstracts of up to 500 words with a short bio (including your time zone) to the conference organisers Kim Simpson & Alison Daniell: adventurousc18wives@gmail.com by 1 March 2021.

We are pleased to announce our mentors and mentees for the 2020-21 academic session:

The scheme will run again in October 2021. If you would like to know more, please visit our Mentoring Scheme page.

The Women’s Studies Group (1558-1837) are please to announce our call for papers for the 2020-21 season is now live. Please consider presenting at one of the WSG seminars. Further details are below and on our website:

The WSG is open to men, women and non-binary people, students, faculty and independent scholars. We invite members old and new to offer papers formal and informal, as well as works-in-progress, on any topic related to early modern and long eighteenth-century women’s and gender studies, including (but not restricted to) history, literature, art, medicine, music, theatre, religion, economics, and sexuality.  Early career and independent scholars are particularly welcome. Since we usually have 3 or 4 papers in a session, papers should be restricted to a maximum of 20-25 minutes, to allow plenty of time for general discussion afterwards.

All meetings for the 2020-2021 season will start promptly at 1pm GMT (with arrivals from 12.30 onward to allow for necessary preparations and administration). We aim to finish by 3.30pm.

The dates are as follows:

*Please note that the September meeting is British Summer Time, and the rest are GMT.

For more information about the society and its activities, including how to join, please see our website at https://womensstudiesgroup.org

Please reply by 17/7/2020 to Carolyn D. Williams at cdwilliamslyle@aol.com

We have rescheduled the previously cancelled March seminar. The session will now take place via Zoom. If you would like to join the session, please consider becoming a WSG member. Full details and abstracts can be found here.

(via Zoom – the link is only available to WSG members)

Lindy Moore: The Scottish Schoolmistress in the Eighteenth Century

Catriona Wilson: “Some attention to those female members”: Feminised monarchy in the first exhibition of Kensington Palace’s State Apartments, 1899

Chawton House has staged an online festival of excellent talks, interviews, discussions and workshops over an intensive three-day weekend which has been a triumph of organisation. Many of the sessions are still available to view on YouTube.

Originally conceived as an actual festival at Chawton, it was forced to go online at short notice. It was part of the current emergency appeal for the future survival of the house, a crisis exacerbated by the coronavirus lockdown. If the key contribution of Chawton to promoting womens’ literature was ever in doubt, this event resoundingly proved otherwise. The number and variety of participants as speakers and audience from all over the world demonstrated the quality of important research and creative thought which makes the study of womens’ lives and writing so vibrant and exciting. The emotional and imaginative connection which the house continues to inspire was clear to see.

Papers were delivered with slides or as informal interviews and most included opportunities for questions via Twitter or Zoom to follow. The festival began with presentations about displays at Chawton on Jane Austen and responses to her novels and on the current Man-up! exhibition, as well as authors’ introductions to books related to female enterprise and courage, such as Julie Wheelwright’s Sisters in Arms: Female Warriors from Antiquity to the New Millenium, Sharon Wright’s Balloonomania Belles, and Wendy Moore’s Endell Street about a hospital which was entirely run by women during the first world war. Related doctoral research by Rebecca James on pirates and Alison Daniell’s on the formidable Elizabeth Knight, the only female squire of Chawton House, added to the sense of dynamic and fearless enterprise which characterised the women featured across all the festival talks.

Jane Austen’s lesser-known contemporary women writers such as Jane West and Jane Porter were discussed by Devoney Looser, and publisher John Murray II’s correspondence and collaborations with writers such as Mariana Starke and translator Sarah Austin were the subjects of Gillian Dow’s talk. Of course, Jane Austen herself and her legacy were essential elements of the three-day programme. This included Emma Clery’s research on the history of the Jane Austen Society and Janine Barchas’s entertaining survey of the many cheap and low-budget versions of Austen’s novels which were produced over the years both here and abroad. Many of these utilised Hollywood film stills for their sensationalised front covers. These prompted very personal memories and sharing of much-thumbed copies in the question and answer session. A fictionalised exploration of Austen and her sister Cassandra’s relationship by Gill Hornby in her new book Miss Austen and personal memories of living in the house as a child by Caroline Knight, as well as Chawton House volunteer Martin Caddick’s research into the house and its various residents over four hundred years set Chawton itself centre stage.

In addition to scholarly papers and readings from new work, an interesting aspect of the festival was the focus on practical creative writing in Claire Thurlow’s writing workshop and Sinéad Keegan’s session on writing found poetry sourced from Chawton’s archive. During Keegan’s sessions, participants were invited to share their own work, constructed, reassembled and edited to form new poems, and helpful advice and feedback were offered. The female accomplishment of needlework, so much part of an eighteenth-century woman’s daily life, was discussed by Jennie Batchelor. Her project which inspired beautiful examples based on The Lady’s Magazine embroidery patterns resulted in an exhibition at Chawton in 2016, and she has now published a book with Alison Larkin, Jane Austen Embroidery. One of her points was that the view of sewing as part of female drudgery and a symbol of oppression, from Mary Wollstonecraft onwards, needs to be reassessed. A final and delightful paper was given by Hilary Davidson who has recently published Dress in the Age of Jane Austen, and her slides dwelt on the fashion plates and satirical prints which often direct our views of the fashion of the early nineteenth century. Women were well aware of the niceties of detail and their implications for taste and decorum.

I have given a taste of the festival which included many more papers. There was a wealth of insights, new subjects to explore and new books to resist buying (or not!) but most of all, a real sense of joy and a shared love of the literature and history which Chawton has nurtured and enabled for many years now. Apart from missing the tea break chats which a normal conference encourages, I found Chawton’s online version was at least as stimulating if not more absorbing and immersive, and I am sure it left everyone involved determined to secure the future of this centre of womens’ writing for many years to come.

Miriam Al Jamil is a committee member of WSG, as well as of The Johnson Society of London. She is chair of the Burney Society UK and fine arts editor for BSECS Criticks. She posts reviews on a variety of sites and in academic journals. Her chapter on a Zoffany painting was recently published in Antiquity and Enlightenment Culture.

Except where otherwise indicated, all WSG content is licensed by the credited writer under a Creative Commons BY-NC-SA Licence.